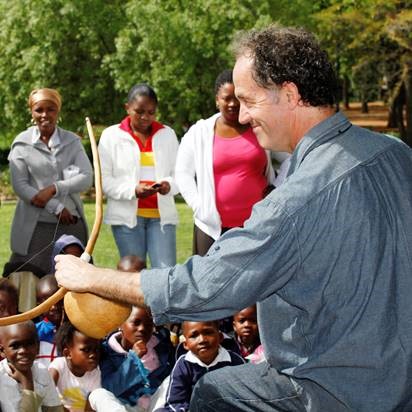 Traditional African music is directly descended from the musical forms that were created by our ancestors starting some 80 000 years ago.

The instruments that were created during those early years are a testimony to human creativity in succeeding to elicit wonderful music out of the most basic materials.

In this workshop we will look at two specific early instruments, the first flute ever created (known as Ixilongo, Mtshingo and Lekgodilo) and a set of one note pipes (known as Dithlaka, Dinaka or Tshikona) which was shared amongst the group each person playing just one note. Each participant will be given a flute and a single note pipe to play and take home.

Both of those instruments rely on the player’s creativity to make music but this is done in a way that allows each player to contribute without feeling pressured. There is no notation to follow, instead a set of very basic principles are applied to create our own original music. That is of course how the music would have been created originally.

The workshop will cover a variety of African urban styles from Marabi to Jive and Kwaito.

This is a workshop for all ages, families and group of friends are invited to join for a fun session of making music.

No previous music or instrument knowledge is required.

The facilitator, Pedro Espi-Sanchis, was introduced to African music by Dr Andrew Tracey and began what became a lifelong career, learning and teaching in this field. He has specialised in instrumental African music and the reintroduction of the wealth of traditional instruments and knowledge systems to schools and the public in general. Pedro runs intensive teacher training programs for education authorities across Southern Africa and worldwide at Universities, Colleges of Education and festivals.

Pedro established the practical African music program at the College of Music, University of Cape Town from 1982 to 1986 and was head of the Music Department at the Giyani College of Education in the Limpopo from 1989 to 1994.

He has worked for education publishers for many years, producing the music and recordings for “Stories from The Little Library” published by Cambridge University Press. He was the Oxford University Press (SA) music writer and audio producer for the text books used in many South African schools today.

He has collaborated with veteran Xhosa musician Madosini for various projects and concerts, one of which Bow Conversations forming part of the new exhibition Any Given Sunday – artful chance encounters in Gallery 1.

Please note: no cancellations will be given a refund.